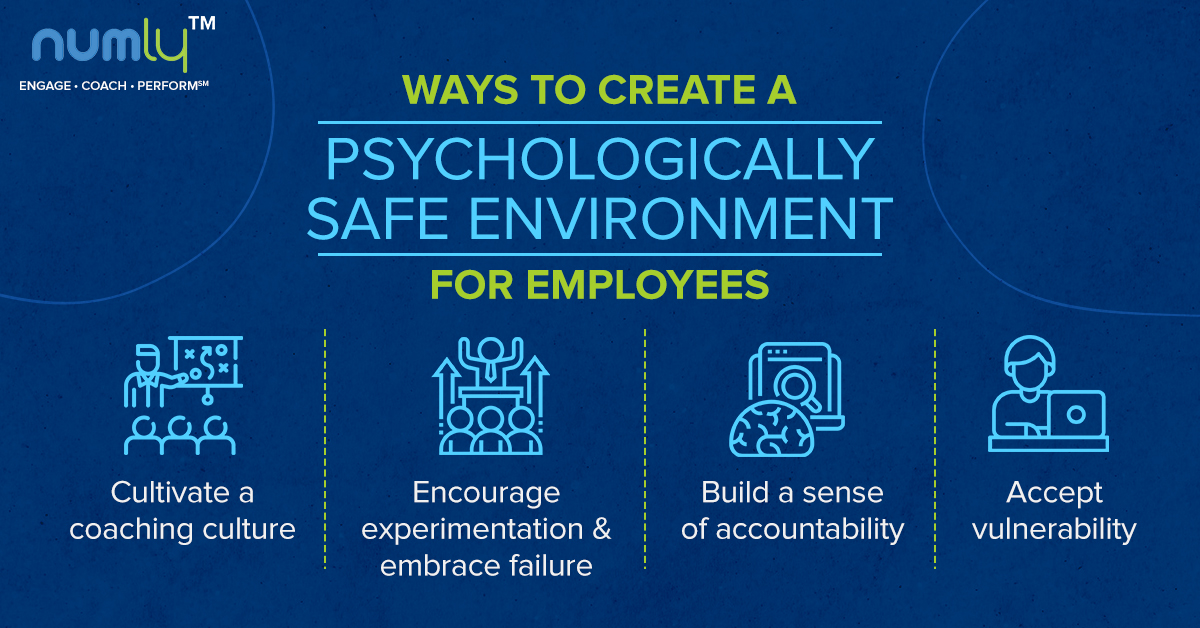 In 2012, Google set out to seek an answer to a very important question – what makes a team successful? They conducted a two-year program from 2012 to 2014 called Project Aristotle. They studied 180 teams in Google, conducted 200+ interviews, and analyzed 250 different team attributes. After an extensive study, they found five common attributes among the top-performing teams. One of them was psychological safety.

A safe workplace builds top-performing teams and pays rich dividends for the company.

How To Create a Psychologically Safe Environment for Employees?

As employees spend most of their day at workplaces, it’s important to build a safe space for them. A coaching culture can help in building that safe space. Coaching is all about having meaningful, 1:1 candid conversations between managers and employees. In a coaching culture, managers and team members have conversations about work, new ideas, challenges, career roadmaps, etc. The manager acts as a coach and works with the employee to overcome challenges, review the current skills and job performance, and plan their growth path. A coaching culture can boost the morale of employees and build trust. It creates a sense of belonging among them and makes them feel valued.

Employees feel more engaged, which according to studies, could improve their productivity by 17%.

Coach and train the managers and employees about coaching

Coaching is not an innate, natural skill. It has to be cultivated. That’s why it’s important to train managers on becoming coaches. Employees need coaching too as they play an equally crucial role in creating a psychologically safe environment for other team members. Learning soft skills might seemingly look simple, but it’s complex considering that it involves learning skills like listening to multiple perspectives, accepting criticisms, communicating ideas without fear, and resolving conflicts. There’s a lot of unlearning and re-learning involved. Communication skills are extremely important to build a safe work culture and that’s possible only through regular coaching and training sessions.

The one factor that differentiates successful companies from mediocre ones is acceptance of failure. Jeff Bezos, the former boss of Amazon, one of the arguably successful companies, is known to be a fan of failure. He famously referred to Amazon as the best place in the world to fail as the company had lost billions of dollars due to failures. But that never stopped Amazon from experimenting. Now, we do not recommend losing billions in experiments, but the important factor to note here is that Amazon encouraged employees to innovate and experiment with new ideas even if it led to failure. A mindset like that can be nurtured only in a company that has a psychologically safe environment. Most times employees are reluctant to share ideas or try something new due to fear of failure. That could stunt the company’s growth. Managers must promote innovation and make it clear to employees that failure is acceptable. This will give employees the confidence to share their ideas and perform different experiments that could lead to innovations within the company.

Build a sense of accountability

In a psychologically safe workplace, employees don’t blame each other for the failure. They take personal responsibility for their decisions and try to rectify the mistakes they committed. Managers must lead by example while building accountability among team members. Managers must admit to their mistakes, ask for help when needed, accept criticisms from team members, and be open to different opinions. When managers take responsibility for their actions, employees will automatically follow the suit. They will be able to take accountability for their actions and be more mindful of their decisions. This helps in building a healthy workplace.

A psychologically safe workplace allows employees to be vulnerable about their fears and failure. They look at vulnerability as a strength and not a weakness. By accepting vulnerability, managers show that employees can share what they genuinely feel and think. They can ask for help without any fear of judgment or bias. This encourages the employees to navigate through tough conversations and build a close bond with other team members. It could also boost their overall confidence and put them on a growth trajectory as they feel motivated to overcome the challenges and focus on moving ahead.

According to a WHO report, 15% of all working-age adults have experienced a psychological disorder due to stressful environments at workplaces.

Although most HR initiatives revolve around creating awareness about psychological safety, real change occurs when immediate managers take efforts to build a safe workplace. They are the ones who have the most immediate impact on employees. That’s why most companies expect managers to develop a new skill set for creating a safe space for their team. Managers are taught to be more empathetic, adapt their management style to manage team members across different generations and cultures, and create a space where employees can share their personal and professional thoughts fearlessly. Managers have to don the hat of a coach to mentor employees and unlock their potential. This isn’t something that happens organically.

This program will help managers to:

If You Want to Win the War for Talent, You Must Train Your Managers to Lead

Mentors Are Critical for Women Leadership Development. Why Do Women Not Have Them?